Alex Branch
Instruments/Sound Sculpture > Sounds From The Belly of the Ship
Ship As Musical Instrument: Sounds From the Belly of the Ship. 2015.
Musical sounds recorded deep in the belly of the Lilac Steamship, brought up from below and played in the helm room for the Lilac Art Summer Series. Originally proposed as a project to play the architectural elements of the ship as an instrument, it became clear that the ship was already emitting music on its own. The sounds changed frequently depending on tide, water traffic, foot falls.  The recordings were played through a speaker system made from a tool box and tin can speaker and was installed in the helm room among other forms of communication used on the ship during its operation, consisting of telephones, and tube systems that allowed crew members to communicate from various locations. (photograph by Nicole Antebi). 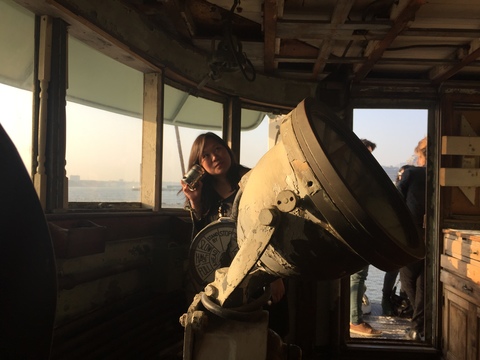 Sounds From The Belly of the Ship